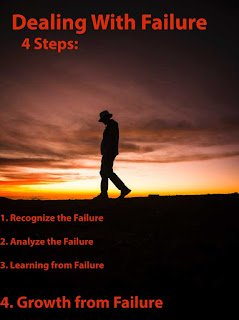 Experiencing Failure as a Leader

As leaders, failure can be simplified to any situational outcome where the team does not meet its goal.  This isn't an exclusive definition, and while many flavors of failure exist, this will be the topic of today.  A general responsibility of being a leader is recognizing any failure within the group to be our own.  Team failure is leadership failure, and this statement is never untrue.  Failure can be generalized to the specific goals related to short term delegated activities, or to the long term goals related to the KPI's of an organization.  Failure may be a downward trend,  an unfortunate event, or just a bad day.  Failure may not be in the metrics, but just in the mood.  A Mirriam-Webster Dictionary definition of failure is "a lack of success in some effort. : a situation or occurrence in which something does not work as it should."  Obviously, "working as it should" is subject to interpretation, but usually failure is pretty clear right?  Unfortunately no.  Sometimes failure goes unnoticed, and this is where it gets dangerous.

How to Deal With Failure?

Failure itself isn't detrimental.  There are many teaching on failing into success.  The importance of any failure is what we take from it, and that taking must be positive.  If we ever experience failure and have thrown our hands up, given up, or blamed others, we have done the only things that we should never do as leaders experiencing failure.  The keys to successfully deal with failure are to recognize, analyze, learn, and grow.

To recognize failure means to be aware that something did not work as it should.  We must first understand how it should have worked and understand that the outcome does not match the expectation.  Being consciously aware at this step is successfully completing it.

To analyze failure means to have understood that things did not work as they should and then to ask why.  There are many different methods to this, including root cause analysis (RCA), among many others.  The endgame of analysis is to determine what failed and why it failed.

To learn from failure is to determine what failed and why, and then identify things that should have gone differently in order for the failure to be a success.  This can be re-worded and read as "what we could have done differently in order to produce success."  This step perhaps is the most important because it is in this step that removes all the negativity from failure and actually transforms it into a positive occurrence.

Growth from failure results from the implementation of the truths that we have learned from the analysis of the failure.  This is the ultimate endgame of any failure, because not only have we experienced success from learning from our failure, but here we demonstrate that we have successfully learned how to react to it.

Anecdotal Story from My Experiences with Failure:

It is no secret that I have achieved my success with leadership as a blue-collar factory laborer in the field of logistics.  I worked my way up into management through promotions.  As a manager of a departmental team, I lead a team of individuals to push product out to carriers which then deliver that product to customers.  My success is measured by a variety of metrics that record how much my team and I actually move.  On one particular night it seemed as if things just were not moving.  The end of the night came, low and behold, the numbers produced were low as expected.

This means many things, including recognizing that we did not do as well as planned, determining why, reporting this to my superiors, and then trying again in the future.  The secret to growing from this failure is knowing that when I try again in the future, I am going to implement different strategies to turn the course of the failure before it starts.  In my specific situation I recognized that one of the root causes of the failure may lie in my teams general knowledge of the software involved, and in order to grow I would have to foster an atmosphere of learning and teaching so that all of my team members were up to speed on how to properly use the software required to do the job.

My implementation of the growth phase of failure was a monumental success.  I identified key team members whose ability to learn quickly was slightly higher than the others.  I focused my time on them and communicated to them my intentions for this focus of attention as well as my expectations that they would not just sit on the knowledge.  I watched as I planted seeds of information and those seeds grew and spread to the entire team.  Over time as the team learned and information spread it dawned on me that there was positive growth from a failure that could not have happened without the failure.  Metrics trended up and new records were set.  Failure was the root cause of success.

An acronym that we should know as leaders of an organization stands for "Key Performance Indicator".  This may seem self explanatory, but most often is not understood.  Most look at KPIs and read goals, but goals are really the next step of identifying a KPI.  Knowing your key performance indicators means to understand the metrics and numbers that you are looking at as well as understanding what it means for them to rise or fall.  From here we can deduce that after every KPI should come a goal, and that goal itself becomes key.  A key performance indicator for operations may be how many units were manufactured during a certain period, while a key performance indicator for supply or procurement may be the difference in units from running a completely lean operation.  KPI's are industry or organization specific, in that, they are unique to the goals of the industry or organization.